How Medicine and Oral Health Intersect 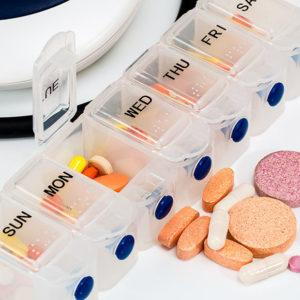 We all know that medications can have side effects.

If you tried, you could probably hear the voice in pharmaceutical commercials rattling off some of the most common ones in your head. We bring it up because those side effects often include oral health problems.

Medicine and the Chemistry of the Mouth

Some of the medications and even vitamins we take can be directly harmful to teeth. This is more of a problem for children, since adult medicine mostly comes in the form of pills to be swallowed. Medicine for children, on the other hand, often takes the form of sugary syrups and multivitamins. That sugar feeds oral bacteria and can contribute to tooth decay.

Adults and children alike may experience oral side effects from inhalers — particularly oral thrush, or white patches of fungus on the tongue, the roof of the mouth, and inside the cheeks, which can be irritating or painful. A key preventative measure for patients who use inhalers is to rinse with water after using the inhaler (also a good idea after taking cough syrup or multivitamins).

The Indirect Impact of Medicine on Oral Health

Even if a medication makes it past the mouth without causing direct harm, those side effects can still kick in later. For example, blood thinners can make the gums more prone to bleeding while brushing. A number of medications can cause inflammation in gum tissue, increasing the risk of gum disease.

While this may not be an actual health concern, several medications can affect our sense of taste, causing a weird bitter or metallic taste or other changes. There have been rare instances of drugs for osteoporosis compromising the bone tissue in the jaw, which increases the risk of gum recession and tooth loss.

Dry mouth is the most common oral side effect of prescribed and over-the-counter medications alike. Dry mouth, in addition to making chewing and swallowing difficult and reducing the ability to taste, leaves the teeth and gums vulnerable. Saliva is the first line of defense against oral bacteria, and without it, it’s much harder to defend against gum disease and tooth decay.